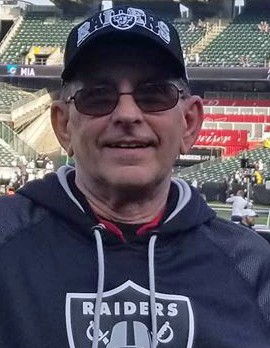 Ted Lee Durham, 68, of Taylorville, took his final breaths surrounded by his girls and Three Dog Night in the background on Tuesday, February 2, 2021 in his home.

Ted was born on November 11, 1952 to Betty and Clay Durham of Taylorville.  He graduated Taylorville High School in 1970 where he was a trumpet player in the band and was a member of the first ever Taylorville High School Wrestling Team, a title of which he was extremely proud. On October 14, 1972 he married Bev Beard of Taylorville and they shared a beautiful 48 years of marriage.  Together they raised two daughters, Anji and Lisa and were super fans to their 5 grandchildren, 1 great-grandson and 2 bonus grandsons.

Ted worked at American Fixture Company (AF-CO) for over 20 years, creating custom kitchens for homes all over Illinois. His beautiful mind and endless talent also brought to life numerous swing sets, Pinewood Derby cars, and science projects.  He retired from Nudo Products in Springfield as a supervisor on the night shift, a career which prompted his poem “Ode to ‘C’ and ‘D’ Shifts”.

With Ted’s numerous accomplishments in life, his favorite was his daughters and grandchildren. He was the epitome of a hands-on dad and Papa. He loved cheering on all of his girls and boys usually front row for basketball, cheerleading, soccer, and dance recitals and competitions. He amazed them all daily with his knowledge of trivia, random facts, music back stories, and home made candy. He instilled early to Anji and Lisa that classic rock is the best and they spent these last few years attending concerts of his favorite bands, Three Dog Night and Chicago.

A die-hard lifelong Raiders fan, if Ted was not wearing purple and gold for his grandkids, he was wearing black and silver for his Raiders.

The king of dad jokes, the human GPS and his ‘never met a stranger’ mentality, the world will be a little lost for more than one reason for a while.

Visitation will be held on Saturday, February 6, 2021 from 1:00-3:00 p.m. at Sutton Memorial Home in Taylorville. Private family services will be held at a later date.

In lieu of flowers, Ted has asked that donations be made to the Tornado Wrestling Foundation, Jane Griffiths, 916 E. Bidwell Street, Taylorville, IL.

To order memorial trees or send flowers to the family in memory of Ted Lee Durham, please visit our flower store.