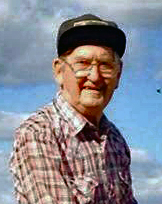 Roy Adkins, 94 of Ohlman passed away on Sunday, August 25, 2019 at 11:00 a.m. at Nokomis Nursing and Rehabilitation Center in Nokomis, IL. He was born on January 19, 1925 in Audaban TWP in Montgomery County, IL the son of Bryan and Iva (McCain) Adkins. He married Genevieve Phegley on June 4, 1950 in Lakewood, IL and she preceded him in death on December 4, 2017. Roy worked as a farmer and he was a member of The Rose City Twirlers and many square dance clubs.

To order memorial trees or send flowers to the family in memory of Roy Adkins, please visit our flower store.