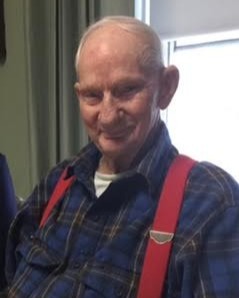 Raymond Andrew Baker, 93 of Taylorville passed away at 2:15 pm Saturday January 23rd 2021 at his daughter’s residence. He was born on February 20, 1927 in Mattoon, Illinois the son of William and Lula (McMahon) Baker. He married Delores Goodwin then was remarried to Louise Ridgeway Gelonek on January 29th 1967. Raymond and Louise celebrated 50 years of marriage.

Raymond served in the United States Navy during World War II from 1945-1946 aboard the U.S.S Breton. He retired from Caterpillar in 1992 with 26 years of service.  He enjoyed fishing, operating and repairing heavy equipment, building houses, barns and various projects made from wood and baking his famous sweet roles.

A memorial service will be scheduled for a future date. Sutton Memorial Home in Taylorville is assisting family with arrangements.  Burial will occur at Anderson Cemetery in Palmer IL on Friday January 29th 2021.

To order memorial trees or send flowers to the family in memory of Raymond Andrew Baker, please visit our flower store.