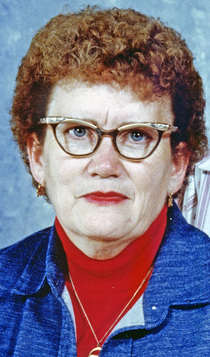 Irene “Nellie” Campbell, 82 of Mt. Auburn passed away on Saturday, April 2, 2016 at 7:03 p.m. at her residence in Mt. Auburn. She was born on May 19, 1933 in Lowder, IL the Daughter of Merle Wayne and Velma Lucille (Crouse) Summers. She married Don Casteel on December 24, 1948 and he later preceded her in death in October of 1965, then she married Robert Campbell on May 21, 1966 in the Southern Baptist Church in Taylorville, IL.  She worked as a homemaker living her life in Lowder, Auburn area and later in Mt. Auburn. Nellie Irene, in her younger years enjoyed bowling, Bunko, camping, playing Bingo, playing the Lottery and most recently putting jigsaw puzzles together with her husband, Bob. She and her first husband, Don, owned and operated Irene’s Cafe in Auburn in the 1960’s. She then worked as a file clerk for the State, enjoyed the benefits of selling Bee-Line clothing thru in home parties, and was a daycare provider for many children in Mt. Auburn and surrounding areas.

To order memorial trees or send flowers to the family in memory of "Nellie" Irene Campbell, please visit our flower store.