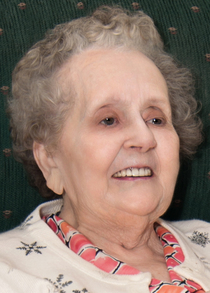 Mildred Faye Smith Nee McKenzie, age 93, graduated from this life and joined her Savior on November 18, 2015. She was Born in Cerro Gordo, IL on August 28, 1922. Her Parents Were Joseph and Ota McKenzie. She was preceded in death by her husband Harry who died on January 22, 1986. Siblings who preceded her in death were Norman, Elmer, Warren, Ruth, Eldon, Kenny, and Gerald. Her Son, Larry Webber who passed away in 2003.

Our mother helped with farming for many years. She assisted her husband with dairy farming. When Dad was running gas stations, Mom helped to do that as well. Later she worked for a super market in Taylorville, IL making her noodles and other great delights. Then she worked in the floral department at Walmart which she enjoyed greatly. She drove a school bus for some time. Then she helped with transportation for seniors. She was a resident of North Adams Home in Mendon for several years. Staff at the home loved her very much. They talked highly of her and were deeply saddened by her passing. Their Wonderful care of her over the last several years is truly appreciated and cannot be adequately expressed.  Mildred was active in her local Baptist Church where she heard the wonderful truths of God’s mercy and his grace. A verse she loved was John 14:16 which told of the only one who could save any sinner if they would but trust him in repentance and faith. Having made that choice in 1971, she had peace about salvation and her eternal destination. She was a former member of Grace Baptist Church of Taylorville, IL and then later of Tabernacle Baptist Church in Quincy, IL. She loved hearing sermons and singing the old hymns. Many residents of North Adams would hear her yodel when given the opportunity. She would always say she was feeling good and in no pain. Her expressive joy at seeing her children and family members will long be remembered. She will be missed, but we know the she is home with her Lord.

To order memorial trees or send flowers to the family in memory of Mildred Faye Smith, please visit our flower store.