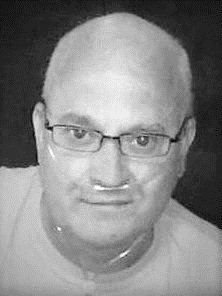 Jack Roland Pearce, Jr. 55, of Taylorville passed away on April 2, 2019 at his home. He was born on October 2, 1963 in Taylorville, the son of Jack R. and Susan R. (Brooks) Pearce. Jack married Jill Taylor on November 13, 1993 at the Taylorville Country Club. Jack graduated from Taylorville High School in 1981 and attended Rochester Community College, Rochester, MN. He was a diehard Minnesota Vikings football fan. Many remember Jack from Ray’s Place and McCarty’s restaurants before starting a career in Illinois State Government. He worked for the Secretary of State and the Illinois Human Rights Commission in several positions, including legislative liaison. Himself an Alpha-1 patient, he went on to work for CSL Behring as a Patient Advocate. He formed valuable friendships with Alpha-1 patients and their families from across the country. Through social media, he was able to maintain those friendships even after travel was no longer possible. Jack was raised with a strong community-minded appreciation for Taylorville and Christian County. He served on the Christian County Board for nearly twenty years. Jack was a member of the Taylorville Evangelical Free Church where he played guitar with the praise team. He enjoyed free time as a social member at the VFW, spending time with his rescue beagles, Abby and Minnie, playing guitar, watching sports, arguing politics and soaking up the summer sun.

To order memorial trees or send flowers to the family in memory of Jack Roland Pearce Jr., please visit our flower store.