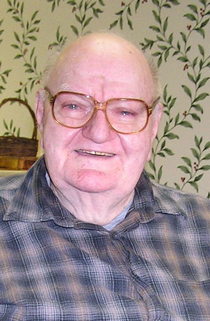 George C. Durbin, 89, passed away May 26, 2015. He was preceded in death by his father, Isaac Francis Durbin, and his mother, Harriett (Hattie) C. Durbin. He was also preceded in death by his brothers, Quintus, Beaufford, Donald, Isaac, and Carl Durbin and his sister, Harriett Wells. He is survived by his dear friend Carrie Enlow and many nieces and nephews. George was a veteran of the Korean War. He was in two battles for which he won two bronze battle stars and an infantry combat badge. He retired from Sangamon Company in 1989 after 41 years of service. He was especially proud of his plaque, Sangamon ring, his dome desk clock, and his stately grandfather clock, all of which he received in honor of those many years. He was a member of St. Mary’s Catholic Church in Taylorville. He loved to go fishing in his younger days, and to read western novels and watch TV. He lived for many years at Taylorville Care Center and he was very happy there. Visitation will be held at Sutton Memorial Home in Taylorville, on Thursday, June 4, 2015 from 1:00 until 2:00 p.m. Funeral services will follow at 2:00 p.m. with Sister Rose McKeown officiating. Burial will be in Anderson Cemetery in Palmer.

To order memorial trees or send flowers to the family in memory of George C. Durbin, please visit our flower store.