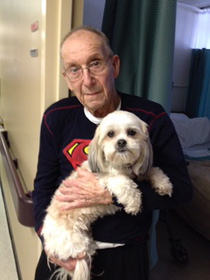 Eugene Lambin, 88 of Taylorville passed away at 5:19 p.m. on Monday, May 18, 2015  at the Illinois Adjutant Veterans Home in Quincy, IL.  He was born on March 23, 1927 in Kincaid, IL. The son of Constant and Pauline (Maquet) Lambin Jr.  He married Gertrude M.  Lambin  in Taylorville and she preceded him in passing on October 21, 2011. Eugene was a coal miner at Peabody Mine #10. He was also an excellent carpenter. He was a member of VFW Post # 4495 in Taylorville and the UMWA. Eugene could fix or build anything, he loved to fish and to be on his boat,  and he passed his love of water on to the rest of the family.

Memorials may be made to:

To order memorial trees or send flowers to the family in memory of Eugene Lambin, please visit our flower store.