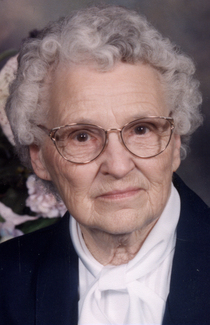 Doris Waterman, 93 of Taylorville passed away on Monday, February 8, 2016 at 9:18 a.m. at Hickory Estates in Taylorville, IL. She was born November 14, 1922 in Berry, IL the Daughter of Richard and Jesse (Dannenberger) Dively. She married Max R. Waterman on March 17, 1943 in Sharpsburg, IL and he later preceded her in death on March 7, 2002. She was a Homemaker and she worked in the Taylorville Schools’ Cafeterias for 47 years. She loved to be busy and did not retire until 91. She loved to Crochet. She and her husband Max spent 59 years on their farm in Johnson Township. She loved her family, especially her grandchildren, and she remained very independent despite her age. She was an avid Illini Basketball and Cardinals Fan. Doris was a member of the First United Methodist Church in Taylorville, IL.

To order memorial trees or send flowers to the family in memory of Doris Waterman, please visit our flower store.