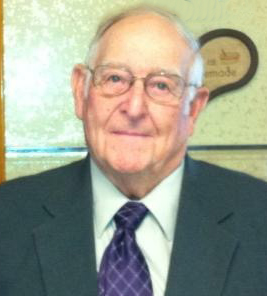 Donald L. Hooper, 87 of Edinburg passed away on Saturday, January 5, 2019 at 11:32 a.m. at Heritage Health Care Hospice in Springfield, IL. He was born on September 7, 1931 in Buckhart TWP in Christian County, IL the son of Arthur Thomas and Nellie Mae (Reller) Hooper. He married Rosalie Hunsley on May 31, 1952 on the Aberdeen Proving Grounds in Maryland and she preceded him in death on February 22, 2004. He then married Loril Woolridge on May 5, 2015 in Bethel Church in Rural Sharpsburg. Don was a lifetime farmer and a member of Bethel Baptist Church, Farm Bureau and Prime Timers. He was a veteran in the United States Army serving from 1952 to 1954 during the Korean Conflict being stationed in Germany where he worked on tanks and 6 bys.

Visitation will be held on Wednesday, January 9, 2019 from 4:00-7:00 p.m. at Sutton Memorial Home in Taylorville. Funeral service will be held on Thursday, January 10, 2019 at 11:00 a.m. at Bethel Baptist Church in rural Sharpsburg, IL with Pastor Steve Robinson and the Honorable Judge Ron Spears officiating. Burial will be in Bethel Cemetery in Rural Sharpsburg with military graveside honors.

To order memorial trees or send flowers to the family in memory of Donald Hooper, please visit our flower store.